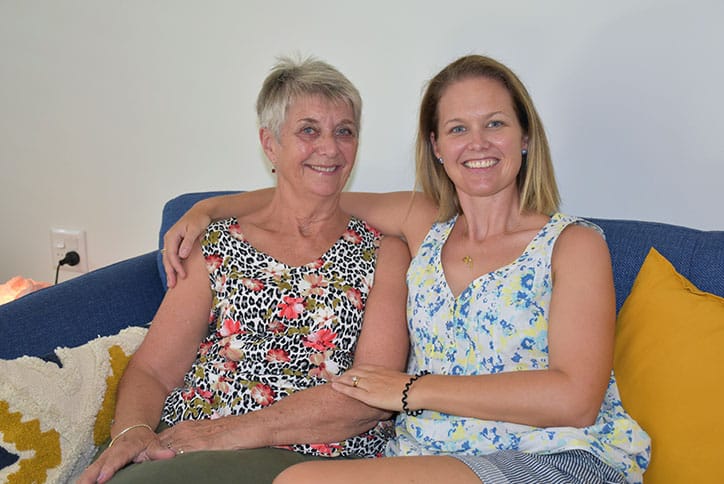 When teachers Victoria and Luke Taber and their two young sons moved from Canberra to Twin Waters four years ago, they were motivated by the desire for a better lifestyle. Three years later, Victoria persuaded her mum, Brenda Winter, who had lived in Canberra for 45 years, to move to the Sunshine Coast too. At Living Choice Twin Waters, Brenda now has the best of both worlds – she’s around the corner from her daughter, son-in-law and grandsons, plus she is enjoying a great lifestyle!

The seed was planted in February 2020, when Victoria and her sister Claire, who lives on the Gold Coast, suggested to their mum that she consider the move to a retirement village on the Sunshine Coast.“Mum came to visit and loved it. I told her she may as well live on our doorstep.”

They had coffee at the Cock & Hen, across the road from the village, and on the way back saw the advertising sign at the roundabout. They made an appointment to see sales consultant, Suzi Morland, who showed them a 2-bedroom Lantern and 3-bedroom Haricot. “In the end, I chose the Haricot as I wanted to use the third bedroom as a study and craft room,” said Brenda.

After depositing on her home, Brenda returned to Canberra and two weeks prior to the Queensland border being closed, she packed up her car and drove up. “I had a COVID-19 test two days prior, in case I had to prove that it was fine to let me in!”

Victoria’s referral paid off, with her name being drawn as the winner of the $5,000 gift voucher at the annual QLD Gala Reward Event on 2nd February. “It was a huge surprise and I was very excited when mum phoned me to say I had won,” she said.

Brenda initially had reservations about leaving her long-term friends in Canberra, however a few of them have visited and are very impressed with her new home. “I’ve also made some lovely friends here. I’ve started Body Toning classes and joined the Mahjong group and the View Club. There are plenty of activities to keep me busy and I just love having my family so close.”