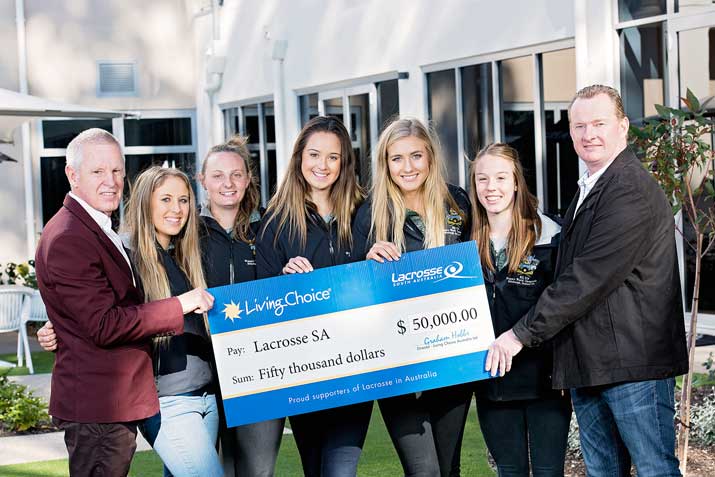 Five talented young Adelaide women Lacrosse players, who will be heading to the U19 Lacrosse World Championship in Scotland later this month, were given a rousing send-off at a reception held at Living Choice Fullarton on Sunday.

It was also a red-letter day for Lacrosse SA, with a massive $50,000 injection for the sporting code by long-time Lacrosse supporter and sponsor, Graham Hobbs, director of retirement village company Living Choice Australia Ltd.

Bree Richards, Hayley Fuss, Eleanor Bishop, Rebecca Steer and Olivia Parker are the Adelaide members of the U19 Australian Lacrosse team that will be taking part in the Women’s 2015 U19 Lacrosse World Championship in Edinburgh from 23rd July to 1st August. The event is being billed as the biggest U19 World Championship ever, attracting teams from 15 countries.

Australia has been drawn in Pool A, against powerhouse Lacrosse teams USA and Canada, as well as England and Wales. However, Head Coach Trish Adams is confident that her team will do the country – and Adelaide – proud.

“It’s been 20 years since Australia won the Gold Medal at the World Champs, with Silver Medals in 1999, 2003, 2007 and 2011. I’m confident that this team can bring home the Gold this year.”
Trish captained the World Cup team that won Gold in 1995 and she has a good feeling that the 20-year milestone will end in celebrations once again.

The team will leave Australia on 12th July and will begin their World Cup campaign with warm-up matches in the USA prior to flying to Scotland.

At a reception to honour the team members, Mr Hobbs donated $50,000 to Lacrosse SA to assist with the U19 team’s expenses, further the development of Lacrosse in schools, pay for women’s umpires and coaches, provide access to fields, assist the senior women’s state team and sponsor the Australian Clubs’ Championship. Mr Hobbs intends to repeat the sponsorship until 2018.