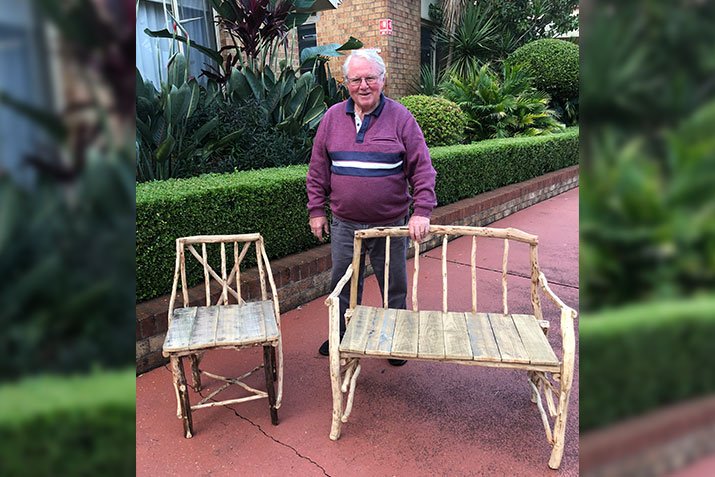 When you move to a Living Choice retirement village you can choose to live privately and not take part in many activities, or you can become fully immersed in everything the village has to offer. Bill Higginson, who lives at Living Choice Broadwater Court with his wife, Evelyn, chose the latter.

Bill loves to keep busy, so much so that when he found he had time on his hands when many village activities were suspended, he rekindled an old hobby he had enjoyed many years ago – making furniture from twigs and scraps of wood.

Bill first attempted to make a two-seater bench from twigs 25 years ago when he was forced to take a break from being a butcher, due to an injury. “While in semi-isolation due to COVID-19, I remembered the bench I had made and thought that instead of watching TV and doing jigsaw puzzles, I would attempt to make one again,” said Bill.

Using twigs he has been collecting on his morning walks through the adjacent forest, Bill first made a single chair and when it was successful, he made a two-seater bench as well. Both are sturdy and can take his weight so are fully functional too.

Bill and Evelyn moved into Treeview Estate at Broadwater Court in 2015 and they soon became involved in life at the village. Both are keen bowlers and Bill is the President of the village’s bowls club. Bill also plays snooker regularly and Evelyn enjoys both bowls and water aerobics. Bill is also a House Representative.

They are delighted that restrictions are gradually easing at the village and Bill was out early on Monday morning playing bowls. “Up to 8 bowlers can play now and we are looking forward to the gradual resumption of regular playing days.”