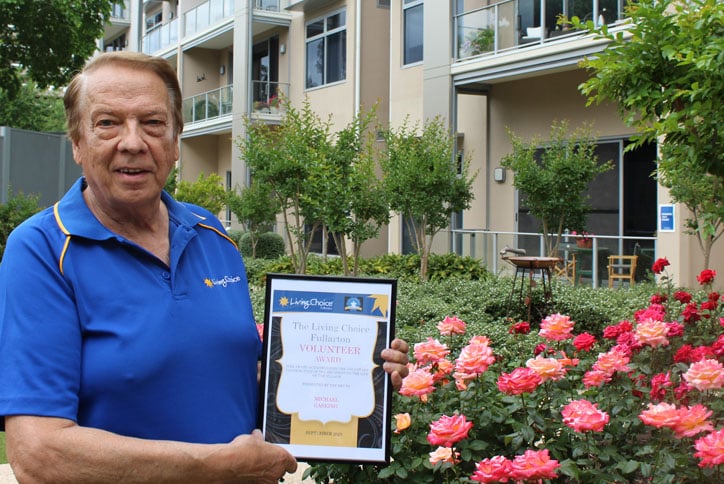 Best known around Living Choice Fullarton as a `go to person’, Michael Gasking gets involved in all sorts of tasks, from checking the basement, organising the workshop, sorting the bin rooms and working some of his magic on cars. Now Michael has been recognised by fellow residents with the first Living Choice Fullarton Volunteer Award, a new award which will be presented every quarter.

The Volunteer Award is the initiative of the Residents’ Representative Committee to acknowledge the voluntary contribution of the recipient to the life of the village. The criteria include demonstrating a commitment to the principles of volunteering in the Living Choice community, excellent interpersonal communication and relationship building skills, being a positive, flexible team player, developing networks and being a leader.

The award is open to all residents and the recipient receives a certificate and a Damien on Fisher voucher.

Michael is certainly a deserving recipient, not only regularly assisting residents but Living Choice management with various tasks too. He and his wife Lois also starred in the very first photo shoot for Living Choice Fullarton, long before construction even began. He has always been passionate about cars and his beautiful red sports car was featured in Fullarton’s first brochure.

Michael has had a very interesting life and it has been quite a journey from a one-teacher school on Bruny Island in southern Tasmania where he occasionally rode a horse to school, trapped rabbits and fished from a boat after school. After completing a Fitting and Turning apprenticeship, where Michael won Apprentice of the Year for all Trades in Tasmania, a Repco Cadetship in Melbourne followed. His most famous role was as chief dynamometer tester for Sir Jack Brabham during his and Denny Hulme’s (NZ) World Formula One Championships in 1966 and 1967. The engines were prepared in Melbourne under Michael’s care for competitions around the world.

Apart from working for Repco, he was National Service Manager for Sanyo-Guthrie for the introduction of colour TV into Australia and was ‘head hunted’ by Wilkins Servis to work in Adelaide. He then became a builder/renovator/property detailer and with his wife Lois, established The Kitchen Place business on N.E. Road. He was also Group Marketing Manager at Master Butchers for nine years and spent 13 years looking after Cold Storage and Fertiliser distribution at Collins Transport.

Lois and Michael will be celebrating 52 years of marriage on 8th November. They have three grandsons in Marlborough St who are frequent visitors to their beautiful apartment and attend Concordia College next door. They also have two granddaughters and one grandson in Melbourne.

Michael has many interests and is a member of the Hawkesbury Historical Society, the Bruny Island Historical Society and the Sporting Car Club of South Australia. He is a motor historian and has a model car collection. Congratulations, Michael on your very well-deserved Living Choice Fullarton Volunteer Award!