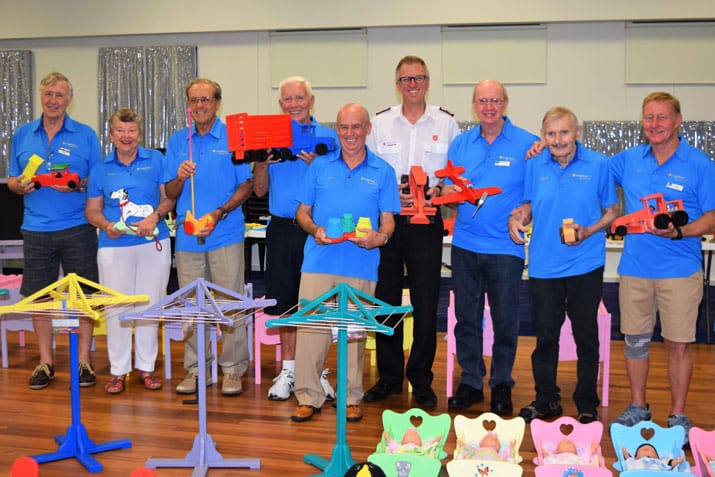 Gifts for needy children – with love from the Toymakers

Every Christmas gift is special but when it’s lovingly hand-made for a needy child, the gift takes on extra significance, bringing joy to not only the child but to its creator. For the past year, the Toymakers at Living Choice Kawana Island, comprising John Sutton, Norma Lawrence, Graeme Hibbert, Don Lindsay, George Humeniuk, Danny Wise, David Fleming and artist Brian Spencer,  have met twice a week, sometimes more, to make more than 200 amazing toys for the group’s annual Christmas donation to the Salvation Army.

In the village’s workshop, they diligently worked for hundreds of hours, making trucks, tanks, cars, planes, billie carts, blackboards, pull-along ducks and dalmations, washing lines, cots, children’s tables and chairs and much more. The members of the village’s craft group also made bedding for the cots, dressed the dolls and made soft toys.

At the village’s happy hour on 8th December, the toys were presented to Major Phil Staines from the Caloundra Corps of the Salvation Army who said he was “blown away” by the number and quality of the toys. He said an increasing number of grandparents were taking on the burden of caring full-time for their grandchildren and they would be “over the moon” to receive such beautiful gifts.

The Toymakers also raffled three extra items they made, raising a further $400 for the Salvation Army.

Guests at the opening included Sunshine Coast Councillor, John Connolly and Tim Bentley, GM QLD & NSW Central Coast. Tim took the opportunity to present the Toymakers and the Craft Group with a donation from Living Choice of $1,200. Several other sponsors also assisted the Toymakers, including Bunnings, Cabot Paints and Ron and Betty Walton.