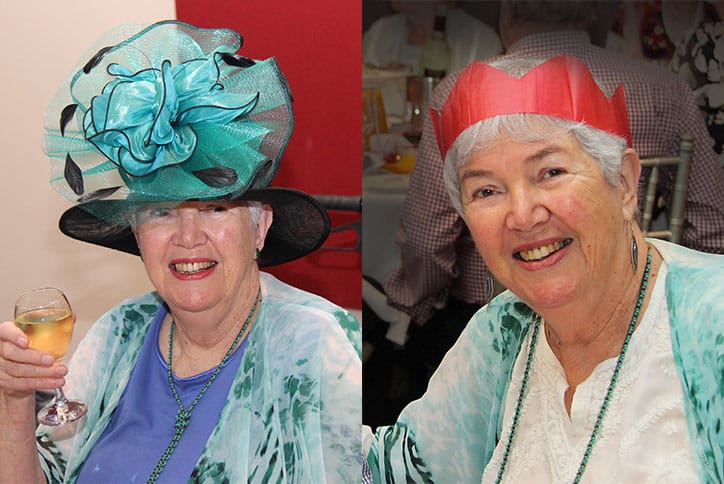 Lorna Clayton at the Melbourne Cup celebration and a Christmas function at Living Choice Glenhaven.

Once upon a time in outer suburbia lived a couple called Max and Lorna. We had bought land and built our house when the kids were very small.  We put in a pool which reached its raucous peak of popularity on hot Christmas days. We also built upwards and as the house grew larger more and more people stayed.

That house was witness to fifty Christmases, one remarkable wedding, many a party and the shooting of at least one mouse.  It listened to philosophical discussions, heated disagreements, laughter, tears, lots of music and the bounce of ping-pong balls. Many was the time it witnessed Max's car driving off in the middle of the night, for those were the days when doctors still did house calls.

All houses are full of memories and this was no exception (besides, it was only a few minutes walk from the golf club).  But as the house aged, so did its occupants, and so it was that we dragged Max, kicking and screaming, metaphorically speaking, to Living Choice Glenhaven.

It was hard for him to admit at first that this wasn't so bad after all. In fact he was secretly chuffed when the person standing next to him on Anzac Day heard him singing and suggested that he should join the choir. He hadn't been going to join anything but - well - he supposed the choir would be okay. Later, it was the Financial Group and then Tuesday Bridge lessons followed by Wednesday Bridge. And Happy Hour on Friday nights.

What's more, he asked the family to drop in for a game of tennis or two. Ten or so of them would turn up with their racquets and a picnic lunch to share at the court.  Most importantly, he played the piano to his heart's content and nobody complained. In the end he loved this place where people valued him as Max the man, not Max the doctor.

Meanwhile, I relished the fact that there were no stairs to struggle with and that our beautiful villa was light and airy and easy to look after. I joined exercise classes, played Scrabble on Tuesdays, table tennis on Thursdays and since there wasn't a writing group, I started one. And, of course, I went to Happy Hour too.  Eventually, as I slowed down, table tennis and exercise classes gave way to Poetry Reading and the Philosophers' Group, as well as a discussion group that focuses (sometimes, but not always, hilariously) on Living with Change.

When Max became ill, the understanding and support from friends and management was strong and steady and unobtrusive. We both felt valued. Everybody in their own way helped to make this difficult time more bearable.  Everyone respected the fact that he no longer felt able to cope with visitors but we still felt ourselves to be surrounded by loving kindness.  And when he died the support continued. . . and continues.

This is a very personal story that, if put in a humdrum way, tells of a difficult but ultimately life-affirming decision to make a change. It tells of an easier way of life (no need to change light globes, pull weeds, hang your own pictures), of the making of new and like-minded friends, and of management that is both practical and caring (a lovely lunch platter brought to our villa on the day we moved in).  What more can I say?