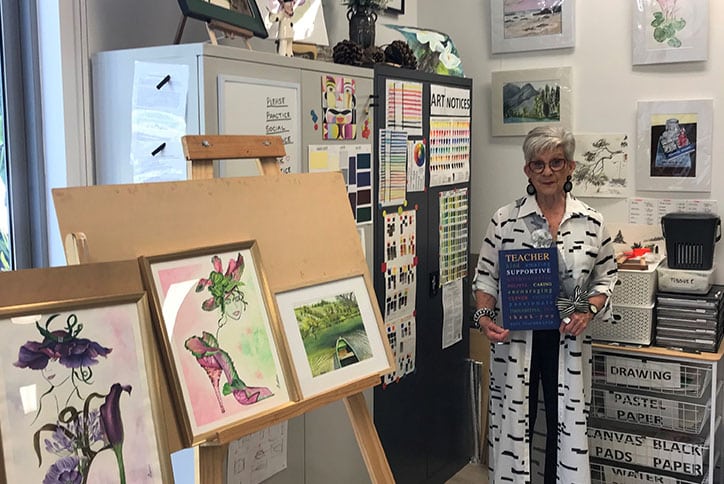 Living Choice Fullarton resident, Jill Argent, loves wearing black and white outfits with big earrings, is passionate about art and history and sometimes terrifies her art students. Her services to art and history have now been recognised with an Order of Australia Medal.

Despite her 32 years of voluntary work for organisations such as the Independent Arts Foundation of South Australia, Carrick Hill Historic House Trust and Friends of Carrick Hill, Jill says she was astonished when informed of the award. “I was nominated by an associate in the arts fundraising world. It was a huge surprise and a great honour.”

Jill is not the only one who is thrilled with the award. Fellow Fullarton residents who attend her weekly art classes at The Art Space are delighted too. “They organised a surprise celebration for me, decorating The Art Space with a congratulatory banner. They also made a sash for me to wear until I get my medal from the Governor of SA in April, as well as a beautiful card.”

Jill is enormously proud of her art students at the village. “Around four years ago, I placed a small notice in the Communique, offering six art lessons “for the curious and terrified”. I intended that there would be six lessons only but four years later, the group is still going strong and growing. I was so proud that at our last pop-up SALA exhibition, the students sold 21 paintings. I get so much joy seeing the huge smiles on their faces.”

Summary of Jill’s services, for which she was awarded an OAM: