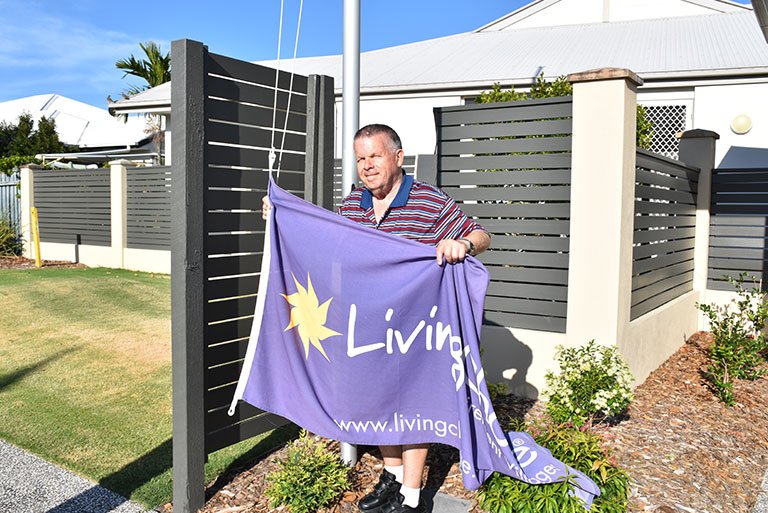 For the past 16 years, come rain or shine, the Australian flag and two Living Choice flags have been hoisted by a very special resident at Living Choice Kawana Island, Malcolm Thiess. At 4.30pm on 31st December, he will take them down for the last time, following his decision to retire from his flag duties, due to ill-health.

It will mark the end of an era for both Malcolm and the village and his remarkable commitment was recognised at last Friday’s Happy Hour, where he was presented with a Certificate of Appreciation signed by Living Choice directors, Graham Hobbs OAM and Ian Tregoning. He also received a framed photograph taken of him with the Living Choice flag.

Malcolm has always been passionate about flags. When he and his sister Betty moved into the village in September 2004, they asked the sales consultant, Trevor Martin, if they could erect a flagpole in the garden of their villa. At the time, Trevor had the duty of putting up the flags every day and, quick as a flash, he said, “Malcolm, I have the perfect duty for you”!

Trevor left Living Choice in 2006 and has since forged a successful career at his real estate agency, Waterfront Agents in Minyama. Village Manager, Russ Dunstan, invited Trevor to present the award to Malcolm and both he and Betty were delighted to see him.

Betty has been at Malcolm’s side since their mother died at a young age and says Malcolm has always been interested in flags, amassing quite a collection from different countries. They came to the village from Alexandra Headland where they lived in a unit in an apartment block built by their father. Prior to that, they lived in Brisbane where Malcolm worked for Toyota for 25 years.

Apart from his flag duties, Malcolm enjoys doing jigsaw puzzles and three mornings a week, he joins Betty for the “Healthy Heart Walk” at the Sunshine Plaza. They have been doing the 45-60-minute walk for 20 years and enjoy a coffee afterwards with fellow walkers.

Malcolm says he will miss not raising the flags at the village, however after two operations this year he has reluctantly decided to hand over his duty to another resident – or perhaps a roster of residents. If anyone would like to volunteer, Russ Dunstan would love to hear from you! 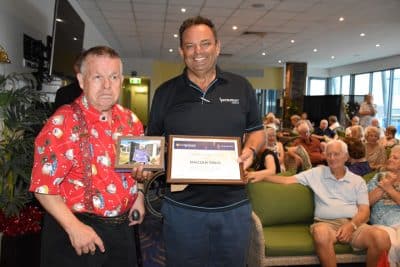 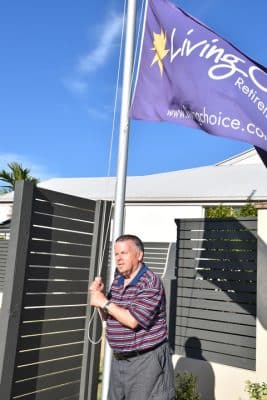 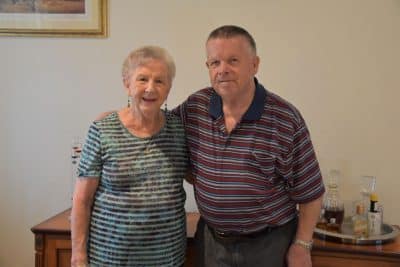 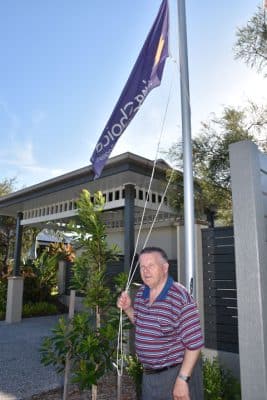