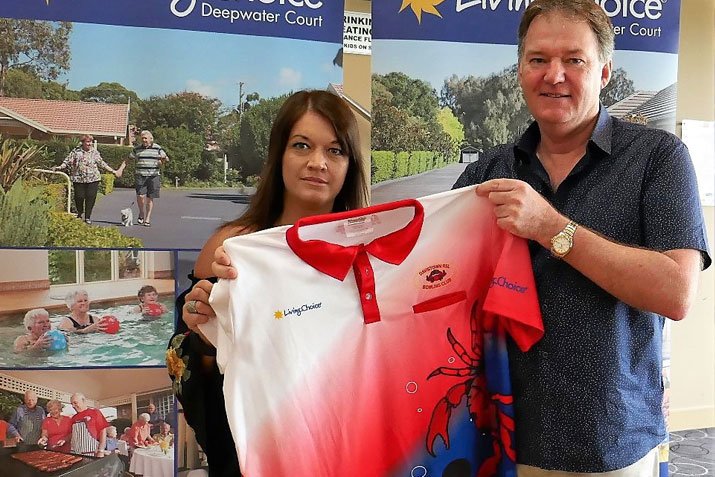 With Living Choice Alloura Waters being located next door to the popular Davistown RSL & Bowls Club, and Broadwater Court being just one suburb away, it’s no surprise that bowls plays an important part in the lives of the village residents.

Recently, Alloura Waters resident, Don Paviour-Smith, approached Living Choice to sponsor the men’s uniforms and Living Choice was happy to oblige. In appreciation, the club invited Tim Bentley, GM NSW Central Coast & QLD, to be the guest of honour at the club’s annual Presentation Day. Tim presented the winners’ trophies to the 2017 champions and also spoke about LCA’s role in Retirement Villages in Australia. LCA residents were well represented in the record crowd of attendees.

The new shirts have been praised for their sharp colours and stylish design. To get Tim into the mood, he was presented with a Davistown RSL Bowling Club shirt by designer Monique Rees.

Don Paviour-Smith was MC for the day and advised Tim that the first step to becoming a bowler was to look like a bowler. One glance at the photos below will confirm that Tim does indeed look like a bowler. Just set aside a couple of hours for some tuition, Tim!