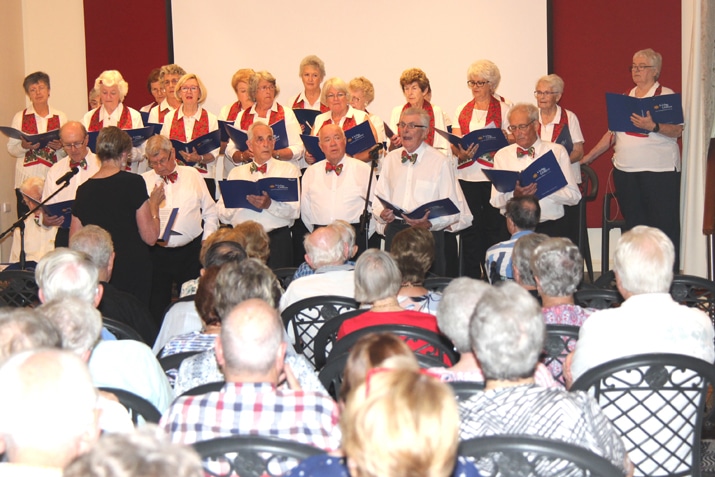 The 6th annual combined Choir, Drama Group and Social Sub Committee Christmas Concert was held in the newly extended auditorium at Living Choice Glenhaven on 16th December and was ranked by our residents as the “best ever” concert.

Some skits were adapted from popular TV shows and played by Bernard Clisby and Bertrand Harrington while others were sourced from stories and jokes on the internet.

This year, with village manager Gail Eyres’ usual encouragement, we included some local content which a number of the cast put together in a humorous way.

The first of these was “TV Interview” written by Ann Flegg and amended by the cast, Frank O’Dwyer, Carmel and Peter Heinrich, Betty and John Murray, Barbara Gurney and Mary Gibbons to reflect individuals’ interests and experiences. This related to the severe hail storm which went through the village on 17th February 2017.

These two skits involved a great deal of rewriting and practice.  As the director I would like to pay tribute to all those involved - actors, writers and especially Ann Flegg on the piano; technicians, Jim Gibbons, David Nelson and Bob Flegg.  Special thanks also to our enthusiastic audience who, as always, fully booked the auditorium.