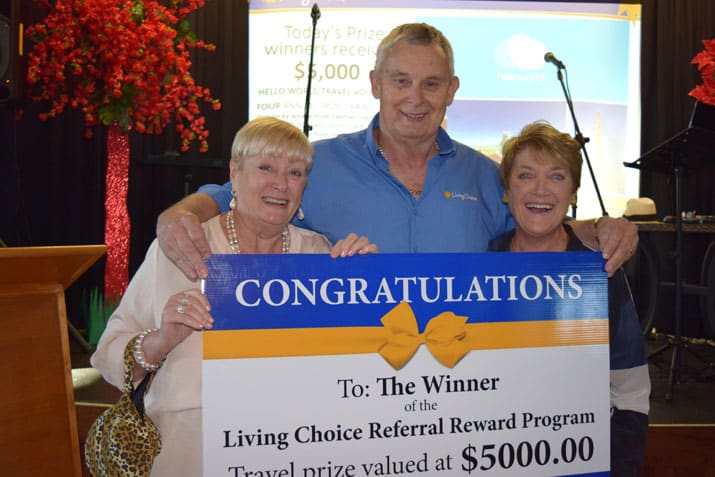 The annual Gala Reward Event to reward successful referrers to Fullarton and Woodcroft was held at Living Choice Fullarton on 22nd July and despite having two entries in the draw of 21, Fullarton residents Sandra Maynard and Helen Bonet were not hopeful. “We never win anything!” exclaimed Sandra at the Sunshine Coast draw, which both she and Helen attended as they were holidaying on the Sunshine Coast.

Half an hour later, they received a call from excited Fullarton residents – “You’ve won the $5,000 travel voucher at the South Australian draw!” It was a fitting win for Sandra and Helen, who both work so hard behind the scenes to promote Fullarton. They are also very active in helping to organise events and activities at the village.

This year, the event was also attended by Woodcroft residents and it was a great opportunity for Living Choice residents to get to know each other better. Living Choice Director Graham Hobbs also provided an overview of sales and said he was particularly pleased that both resident and friend/family referrals accounted for 51% of settlements in the 2015/2016 financial year. Resident Ambassadors from both villages attended the event and he thanked them for their support.