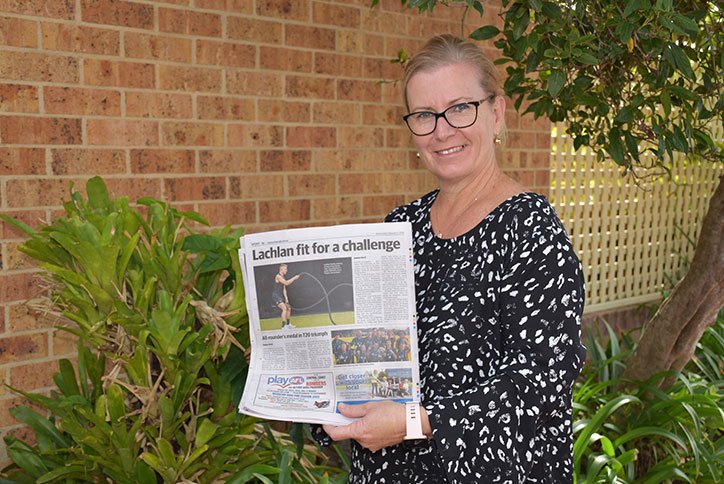 Village manager at Living Choice Broadwater Court, Jodie Shelley, was a very proud mum when the Central Coast Express Advocate came out last week. Her son, Lachlan, was featured as the main article in the Sports section, under the headline “Lachlan fit for a challenge”.

Lachlan (19), a talented rugby union player, has taken the first step on the road to selection in the Australian team for the World Rugby Under-20 Championships in Italy.

The Express Advocate said the Gosford Rugby Club junior was one of 57 players in the Junior Wallabies squad for their first camp of 2020. The squad will eventually be whittled down in the lead-up to the Oceania Championships and then the World Championships in the middle of the year. The fullback has been a member of the NSW Waratahs Academy for two years and was MVP of Eastwood Rugby’s Colts 1 side last season.

“The camp was a really good experience, to see the other lads in my position and see the difference in coaching and the professionalism,” Lachlan said, adding that he is leaving no stone unturned as he strives to make that final squad.

Lachlan lives on the Central Coast with his mum, Jodie, dad Tim, older brother Ben and sister Sophie but commutes to Sydney four or five times a week for training. He will soon be starting a university degree in strength and conditioning. His whole family is talented at sport - Sophie travelled overseas last year as a member of the Newcastle Cricket Club’s U-18 Girls’ Cricket Tour and Ben plays 1st grade rugby union in Sydney. Both Jodie and Tim excelled in sport at a high level, Jodie playing State netball and Tim playing representative rugby union.

Lachlan knows his schedule will be a tough one to juggle but said it would mean “everything” to make it to the World Championships. Good luck, Lachlan!