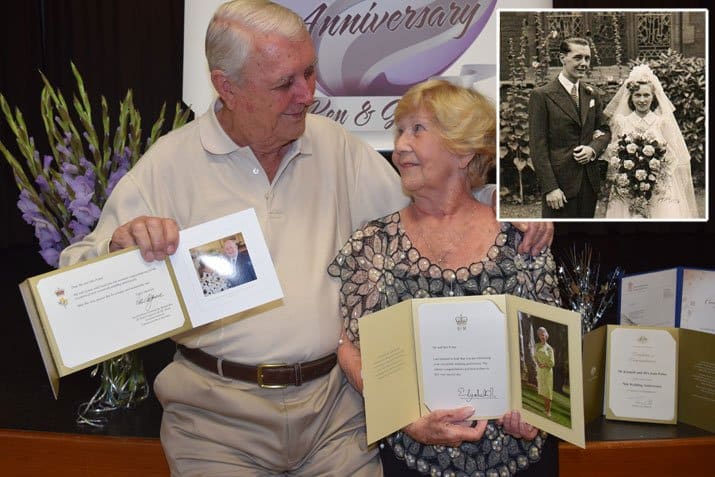 Many Second World War romances blossomed into long and happy marriages, however there are not many that have lasted seven decades! Ken and Joan Potter of Living Choice Twin Waters are amongst the chosen few.

The 1st September 1945 not only heralded the first day of Spring; it was just a few days after the Pacific War ended and the future looked bright. Ken and Joan were married on this day at the Parish Church of St Martin in West Acton, London, only nine months after meeting at Joan’s company Christmas staff party.

Joan worked for S G Browns, which made armature coils for tank drivers’ headphones, and Ken was invited to the party by a friend. “I already had a boyfriend,” said Joan, “but Ken was persistent and we were engaged in February 1945. In those days, because of the war, you didn’t waste any time!”

Not long after they married, they moved to Australia, where Ken’s drafting abilities were soon recognised. They lived in Sydney, Melbourne, New Zealand and Malaysia, including in a grand house in Kuala Lumpur where they had servants and a chauffeur!

Despite his busy life, Ken held senior positions in both Rotary and Probus and learned lawn bowls, which he still plays with great skill. He is also a rules boffin, having been a national bowling umpire.

In between their many moves over the years, Joan had the challenge of raising their sons – which soon grew to five. She also sold shoes and became very adept at cooking, dancing and playing Mahjong. Charity work also took up a lot of time, in particular services for the Red Cross.

Ken and Joan moved into Living Choice Twin Waters in September 2004 and celebrated their 60th wedding anniversary in the newly completed leisure centre on 1st September 2005. For their 70th anniversary, the auditorium was once again decorated for a fabulous party attended by their family and friends.

Their son Keith, a chef from Montville, prepared a delicious sit-down dinner for the 43 people present and fellow resident Ron Boxall read out a wonderful “Ode to the Potters” which ended with:

“And so we congratulate you Joan and Ken, whose lives we’ve been a part. You have enriched the lives of each of us – we thank you from our heart.”