The choirmaster of Living Choice Woodcroft’s Village People Singers recently put down his baton for the last time at a stirring concert held at the village. After founding the choir four years ago, Roger Trevor and his accompanist wife Patsy said they had decided to “call it a day”.

Citing age and health issues, Roger said it was time to retire from planning, organising and presenting the concerts and they would enjoy “just singing” with the choir in future.

The Singers presented their first public performance at the opening of Woodcroft’s award-winning Leisure Centre in February 2018, 12 months after Roger and Patsy’s arrival at the village. The newly formed choir delighted everyone by presenting a medley of songs, including the beautiful and appropriate ‘Bless This House’.

They went on to sing at ANZAC Day celebrations, St Patrick’s Days, the Inter-Village Games (where Roger wrote suitable words for ‘The Quest’ from the musical ‘Man of La Mancha’) and at other concerts that Roger added to their busy program. He also conducted three highly successful ‘Carols by Candlelight’ productions in the auditorium. Their friend and staunch supporter Rob Brook assisted at most of the productions by ‘ferreting out’ soloists from within the village to supplement the choir’s songs.

Roger has been MC and choirmaster at all the concerts and Patsy, who has been accompanying choirs, concerts and dance bands since she was eight years old, has accompanied the choir at all the performances, including at the Sunday afternoon rehearsals.

The couple’s farewell concert - “Showtime ‘21” – began with Roger’s own arrangement of ‘Oklahoma’, with the amazing voice of Adrian Hays leading the choir in a rousing start to a full program of talent, including guest singer Ellie Miles, with a truly emotional rendition of ‘Don’t Cry For Me Argentina’.

Roger said the highlight was Adrian Hays’ presentation of Andrew Lloyd Webber’s ‘Music of the Night’ from ‘Phantom of the Opera’. “Adrian sang it with the quality of a professional that sent a tingle up the spine of many in the audience,” he said.

The concert appropriately ended with the rollicking ‘Goodbye’ song from the musical ‘White Horse Inn’ and Roger and Patsy were delighted to receive gifts by the choir at its conclusion, to the approving applause of the audience. Roger has handed over the baton to Rob Brook, who has been with the choir since its inception and hopes to keep up the good name the choir has established. 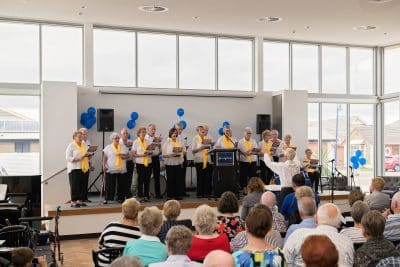 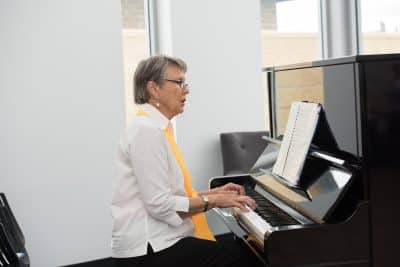 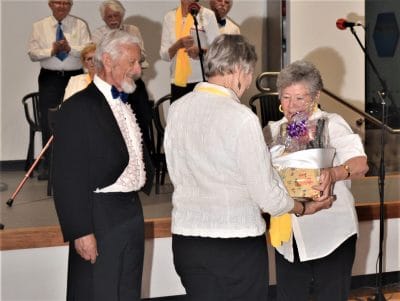 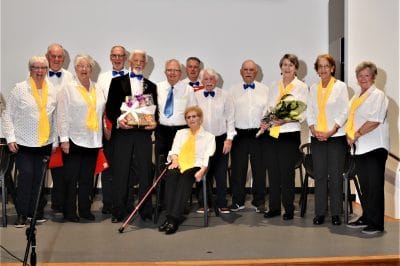